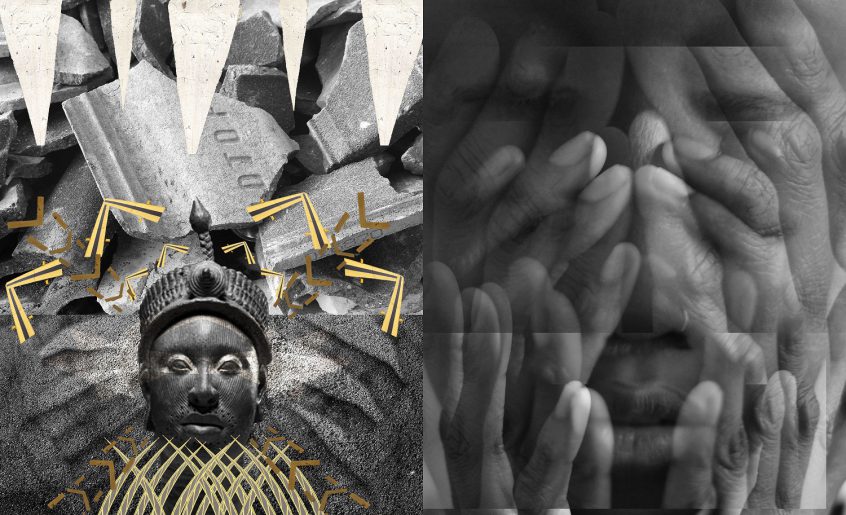 Mukhtara Yusuf is a cultural activist of Nigerian Yoruba origin based in the US, who explores identity making in the context of the black diaspora. Her media of choice include printwork and collage, but she is especially committed to fashion and jewelry design. To her, dress articulates the unfinished business of self-making as a “3rdculture kid” of the diaspora.

In her blog she writes: “What is to be discovered within clothing, fashion, and dress cultures is a revealing metaphor on social interactions of present-day and historic past.” In 2012 Yusuf launched the jewelry collection Darkwater, realized with discarded everyday objects like cable wires, and pins. The collection is a response to trends and themes of Africaness in mainstream wearing culture and a way to reflect the commodification of imagery found in African-inspired jewelry.

At present, she is working on a fashion line, which is also inspired by sustainability.

Ọkan Àbíkú (2015) is the first piece of this collection. Through the trope of re-use, the artist addresses personal issues of trauma, survival, and self-expression as a queer black feminist with sickle cell anemia.

In a recent conversation, Yusuf described to me her design philosophy of Ọkan Àbíkú:

The silhouette is adaptation of a traditional Yoruba silhouette for warriors that is just as easily legible as a contemporary t-shirt with jogger pants. This choice of silhouette and the ambiguities I’ve created within it are a form of contamination, a flattening of time and space, between tradition and modernity, between home and diaspora. The design is in white and red a reference to Shango and the evocation of the strength of the god of thunder. And beaded across the heart of the tunic are handmade beads that are at once references to American military badges and the talisman of Yoruba hunters. Each bead is a piece of waste material, including old fruit and pill bottles from my sickle cell prophylactic shaped into sickled blood cells. Through the use of decaying organic material I engage ephemerality and the realities of my own humanness and sense of being in a body with chronic illness. Each of the beads were cut, gilded with gold paint or copper leaf, and sanded. My use of these waste materials is the expression of an inner dialogue throughout my work on reclaiming worth. As a subjectivtity that has been treated as valueless in both my personal and professional relationships, as a black woman with a chronic illness, I take objects that are, like me, treated as disposable, reclaim them and ornament them to make a statement about their intrinsic worth. The pants portion of the suit has an ode to the ambivalence of the Abiku, a poem written in resist dye:

Along the bottom panels of the pants are a print of sidewalk concrete. Like the tunic portion, in which the placement of materials is symbolic and strategic (the beads both badge and protect my heart), the poems and panels have a significant relationship to my legs. They reference a memory in which, as a result of a sickle cell crisis and abuse by medical professionals, I was left unable to walk for two months. The poem is thus an homage to that near-death experience and the new relationship it created between my spirit, my legs, and myself. The print panels similarly represent the broken and altered relationship to the sidewalk, to the ground, and to grounding. Ọkan Àbíkú is a representation of multiple experiences of liminality and ephemerality and an attempt at asserting self-worth in the West, where disability strips individuals of their legitimacy. The piece draws on Yoruba ontology, where Okan means mind/heart and Àbíkú describes “the one who is predestined to death”, existing in between life and the afterlife. Okan Àbíkú is thus the thinking/feeling of the one in between world: a unified representation of making, wearing, and being that asserts “feeling as an intellectual mode of production”.

At the same time, the items navigate the fashion codes of the West, with their loose, urban outline. As she translates an intimate experience of trauma into an usable, even comfortable item of clothing, Yusuf embeds a concern with social justice into her designs, juxtaposing the human and the living to the consumable and disposable.

To carry this design on one’s body is therefore to come into contact with uneasiness and dispossession, to be forced to acknowledge our complicity in enforcing an ethos of privilege and injustice in our everyday life that rejects difference. Yusuf is keen to underline that Okan Àbíkú is an expression of various incarnations of ambivalence that is informed by personal experience and critical theory. She claims to be inspired by José Munoz’s assertion that queerness is “the rejection of here and now and an insistence on potentiality or concrete possibility for another world” (1999: 1), and maintains that her work builds on his hope methodology of a “backward glance that enacts future vision” (1999: 4). She further states that the various symbols present in Okan Abiku and their ambivalences build on what Monica Miller describes as the Black Dandy’s tradition of disidentification in which the subject “neither opts to assimilate within [dominant] structure nor strictly oppose it”…thus producing a “strategy that works on and against dominant ideology” (2009: 12).

Yusuf is an apologist of the unharmonious, the dissonant, and the disproportioned, who  pursues a “jarring aesthetic” inspired by African spiritualism (Funambulist Magazine 2015). When assembled, her accessories and items of clothing produce dismorphic wholes that induce a short circuit of beauty, taste, and functionalism. Is this good design? The works invite this question and others. How are we supposed to wear items with sharp and prickly edges that come in weird sizes and shapes? Shall we actually just look at and muse over them?

Forcing an engagement with the uncomfortable and the unanswered is exactly what Yusuf’s art is about. The recycling ethos behind Darkwater and Ọkan Àbíkú is a commentary on consumption and the shifting essence of value that extends to human life, identity, experience. She takes experiences of ableism and abuse and creates items that are meant to be at once a form of protection and an expression of her pain and journey towards healing.

Watch this space for further writing about this impressive young artist and her critique of ableism through the Afrosartorial themes of cosmopolitanism and visual activism.