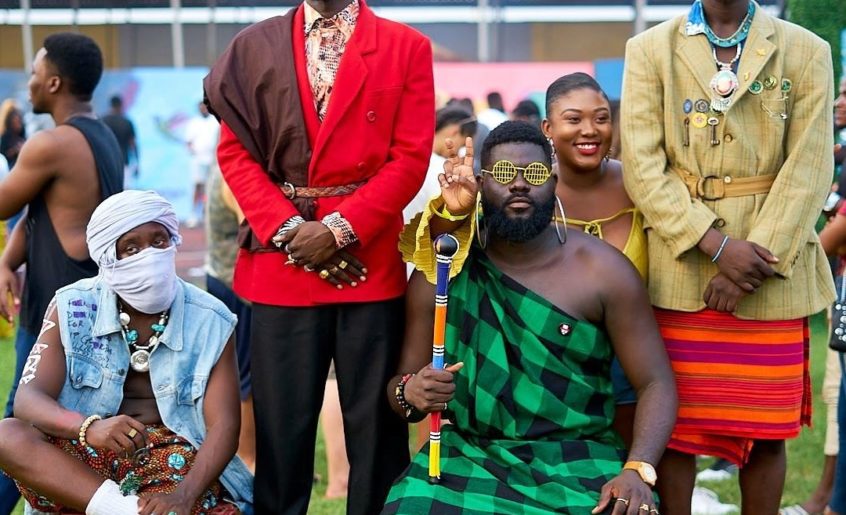 Mohammed Osumanu, 29, is a fashion stylist, designer, and artist from Accra who describes himself as as “a guy determined to push African art and fashion beyond boundaries”.

The founder of the brand Afronative, Mohammed, aka @MohammedBlakk, is also one of the four #KvngsOfTheNewSchool, a crew of self-described “art citizens” advancing “an inclusive movement of afrocentric people who wish to eventually see a truly independent Africa”. The kvngs make appearances at cultural festivals, notably Afrochella, the WaxPrint fest, and “This is New Africa – Kente Party”, in outfits inspired by the dress styles of various African tribes and accessorised with items realized with salvaged material (not unlike Cyrus Kabiru’s famous wearable art made from e-waste) .

The surrealist aesthetic and sartorial evocation of colonial and pre-colonial histories are Mohammed’s tools to bring to life the afrofuturist narrative that defines his creative vision.

The “story of circa 2035”, as he calls it, is a vision of Africa in another future. The story inspired the “Afro Psychonaut” shoot for the album of the Ghanaian band spc.gh.st. The series of photographs posted on social media capture an outdoor scene of men and animal, depicting Ghanaian identity as a constant that has withstood historical changes and technological evolution.

The two men and woman wearing helmets stand by the side of an unpaved road in the midst of bush and trees. One of them is draped in kente – the Asante strip-woven cloth and one of the principal symbols of Asante identity and Ghanaian culture. In some of the pictures the figures are standing next to a donkey. The body language of the afronauts expresses discipline and pride, and the kente-wearing man’s firm grip on the donkey’s collar suggests leadership.

In our interview, Mohammed discloses the narrative underpinning this shoot as follows: “Africa hasn’t been influenced by foreign culture; it has adopted sustainable methods of farming, energy consumption, architecture etc., and survives the Internet age”.

The isolation envisioned in this afrofuturist scenario seems to shield Africa from outside attacks, ensuring the preservation of cultures and identities that Mohammed looks to when creating his styles. He names Kwame Nkrumah and Thomas Sankara as his icons and “many African tribes like the Maasai, Fulani, Tuareg and Zulu” as his style inspiration. African cultural consciousness is therefore the backbone of his practice and the viral message he spreads online and in real life.

Mohammed belongs to the new Ghanaian design scene that promotes innovation through collaborations across the arts and a strong emphasis on cultural heritage and knowledge of local traditions and African histories.