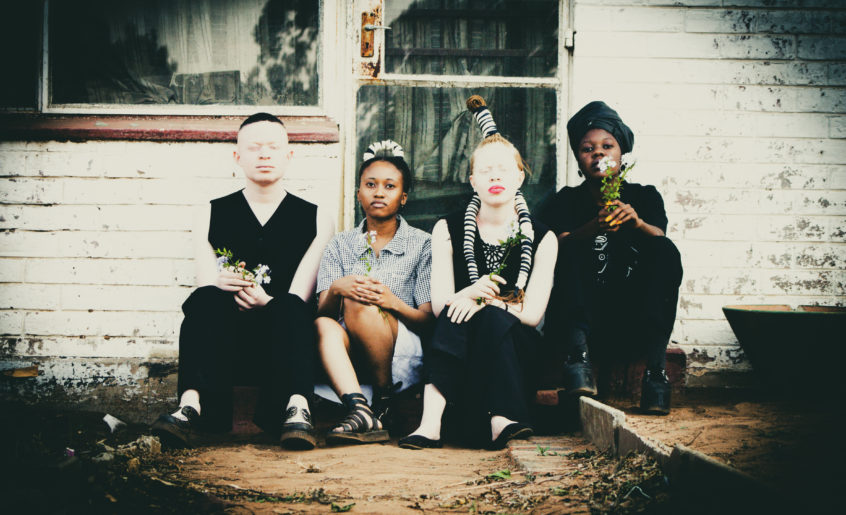 Vusie Shabalala (@vusieshabba), the Soweto-based stylist whom I wrote about in July, has just released the first part of a new visual project entitled “Skin color matters” on Instagram. Vusie anticipated it to me in August and I’m happy to share a sneak peek on Afrosartorialism.

Racism and colorism are a topic that the 25-year old stylist feels strongly about. Vusie claims that in South Africa “people get discriminated each and everyday for their skin tone”, living with it all their lives. He mentions work environments where bosses favour whites over blacks, and the tragedy of albino killings by traditional healers.

“Skin colour matters” is Vusie’s first work that openly addresses this issue in his home country. Apartheid was officially repealed on 27 April, 1994 but it is obviously not a closed matter in South Africa, one that also came up in the interviews we did at SAFW when shooting our documentary “African Catwalk”.

“Skin colour matters” features four models – two albinos, a black girl and a brown girl – in various outdoor locations, including against a brick wall and on railway tracks. They all wear black clothes, except one of the girls who wears a checked dress. The uniform colour symbolizes equality, as Vusie stresses that the goal of the shoot is to show that there is no hierarchy of importance based on skin tone.

Vusie styled the models using his own clothes, maintaining that he feels it is important to use garments that “have DNA within”. So the models effectively carry a piece of history on their bodies, as the stylist is himself often the victim of racism. The black hat with hanging black and white threads sported by the male mode was especially customized for the shoot.

Vusie lives in Soweto, a city within a metropolis and the backdrop of fierce anti-apartheid struggles through the decades of Afrikaaner rule. Today Johannesburg is the core of an expanding fashion industry where socio-cultural issues that have their roots in that history are renegotiatied and debated.

Vusie’s works are part of this debate that is producing a new sense of South Africanidentity in a globalised world where intolerance and racism are unfortunately always too present.

Sarah Nuttall, professor at WITS who so generously agreed to be interviewed for African Catwalk, stated: ““Joburg at present and fashion [in particular] [are] implicated in [the] question of where’s the past where’s the present, where are we, and where’s the future […] and African fashion is very very powerful at this point, in terms of shaping discourses of Africa and the future of Africa as we go forward”.