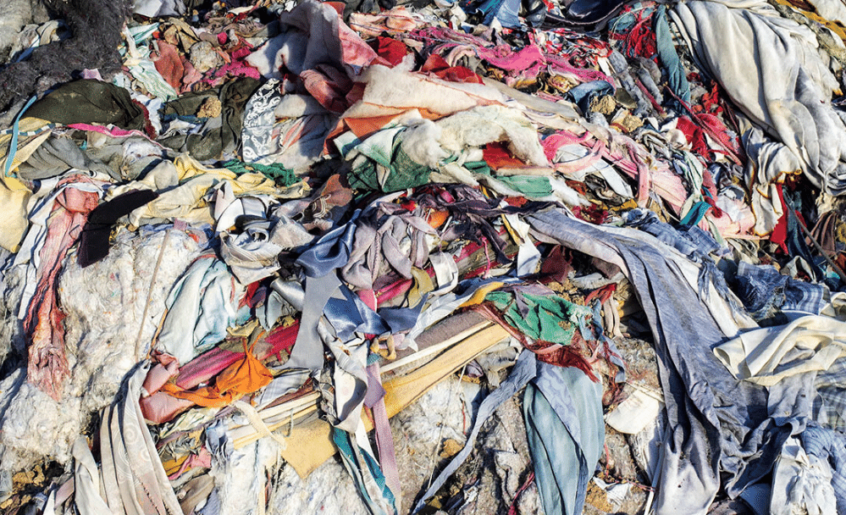 Obroni Wawu is the Akan expression for used clothes in Ghana. It translates to “the white man has died clothes”: a reference to Western material abundance. “Dead White Man’s Clothes” is also the name of the multimedia research project on the secondhand clothing trade that Americans Liz Ricketts and Branson Skinner begun in 2016 to investigate the impact of fast fashion on the Ghanaian ecosystem. Ricketts and Skinner are also the founders of The OR Foundation (@theorispresent), a not-for-profit based in the US and Ghana that advocates for environmental justice.

“Dead White Man’s Clothes” is based on fieldwork carried out at Accra’s Kantamanto Market, a major recycling hub in West Africa with a weekly circulation of 15 million garments (100 millions monthly), shipped off as unwanted and unused purchases from Northern ports, or deadstock of big fashion brands. The trade sustains a large local economy that, since the 1960s has expanded at the rhythm of fashion’s global growth. Today, it directly involves 30,000 people, whose livelihoods depend on their ability to extend the garments’ life (through porting, mending, reselling, recycling, re-using), and indirectly touches the lives of many more, as the influx of global trends shapes the social, economic, and cultural ecosystem.

As Ricketts and Skinners explain, Kantamanto is integral to the management of waste required by the Global North to preserve its take-make-waste business model. “The question is whether justice is served by the position Ghana plays in this global system”. Indeed, the circular supply system operated by the market has not produced a circular economic system that redistributes wealth. Rather, it perpetuates vulnerability and dependency, while producing a viable model of sustainability. To use Sandra Niessen’s definition, Kantamanto is one of fashion’s “sacrifice zones”, where major waste disposal takes place and cheap labour is available (2020).

Kantamanto is an illustrative case study of the biased approach of the fashion system to circularity, one that reproduces inequalities and colonial legacies. The market receives mostly low-grade and even unwearable items, which keeps re-use to a minimum, compared to the scale of the waste received. In fact, the researchers/activists report that about 40% of the stream goes directly to landfill or is thrown away, with a huge impact on the natural environment and well-being of the people in the area. These same people live, in large percentages, in a state of permanent debt, as their involvement in the secondhand trade requires asking loans and surviving on very low income, while often carrying out taxing physical labour.

These insights contradict romantic views of recycling as an empowering and earth-friendly practice, showing that it instead builds up exploitation, dependency, and exclusion. In this scenario, recycling is not innocent, but complicit in the reproduction of power imbalances that funnel the benefits of this system away from local communities and into the pockets of big brands – “the titans of linear industries”.

“The secondhand trade is the outlet necessary for the firsthand trade to exist […] Clothing donations, collection, sorting, exporting, importing, and resale is a big business […] one industry does not exist without the other. Secondhand clothing is part of the Fashion Industry.”

Fashion’s purported “green” turn is based on the externalisation of the environmental and sociocultural consequences of fast fashion and on the invisibilisation of the labour required to re-circulate the waste produced by the Global North. In fact, the tons of clothes that are routinely dumped on Ghanaian soil prove that circularity does not require scaling down production. On the contrary, it offers an excuse to de-politicise fast fashion, turning it into a profit-making resource only, once again, at the expense of the ecologies directly involved in making this infinite growth possible in the first place. Waste becomes a means of capitalist accumulation and economic injustice.

In effect, Ricketts and Skinner’s project underlines fashion’s role in keeping colonialist/supremacist legacies alive. As the researchers observe, it is not by chance that the secondhand trade began, in Ghana, when consumer credit and shopping malls began to expand in the United States. This again connects with Niessen’s study showing that “sacrifice zones expand as the fashion industry expands with it” (2020: 869)

“A materials economy where waste is considered a resource is not revolutionary if this system continues to operate within a global economy built on colonial trade routes, extractive capitalism, and a growth imperative. This model will substitute waste for raw resources, but it will do so in a way that takes us down the same destructive path that we have been on”.

It is however important to add that this system, like all systems of power, produces subjugation and liberation at the same time. Kantamanto is also a space of agency, where Ghanaians exercise authority and experiment with new professional, visual, and sartorial identities. Noteworthy is the OR’s collaboration with photographer/stylist Sackitey Tesa on the series “Heavy Are the Clothes on Your Back” that explores the colonial roots of dress norms and dress culture in Ghana, chronicling the momentous impact of British contact on ideas of respectability, status, and fashionability in the then Gold Coast colony. The photographs feature styles made of recycled clothes that reflect in unique ways entanglements of affirmation and denial, slavery and freedom and the persisting tensions of negotiating the myth of a monocultural, capitalist modernity.

These acts of resistance and model examples of sustainability take place within a system of social and environmental exploitation that dresses itself up as fair and equitable. To counter its destructive effects, the OR Foundation campaigns to de-couple circularity from growth, reduce production, de-colonise the fashion industry, and re-distribute wealth by producing knowledge and organising events that benefit/empower the communities involved in waste-work in Kantamanto.

Ricketts, in particular, has taught at universities, mentored design students, and consults with institutions on textile waste reduction. As co-founder of the OR, she contributed to launch the Sustainable Fashion Initiative, a coalition working to make a zero-waste fashion program at the University of Cincinnati and addressing social inequity within fashion education.