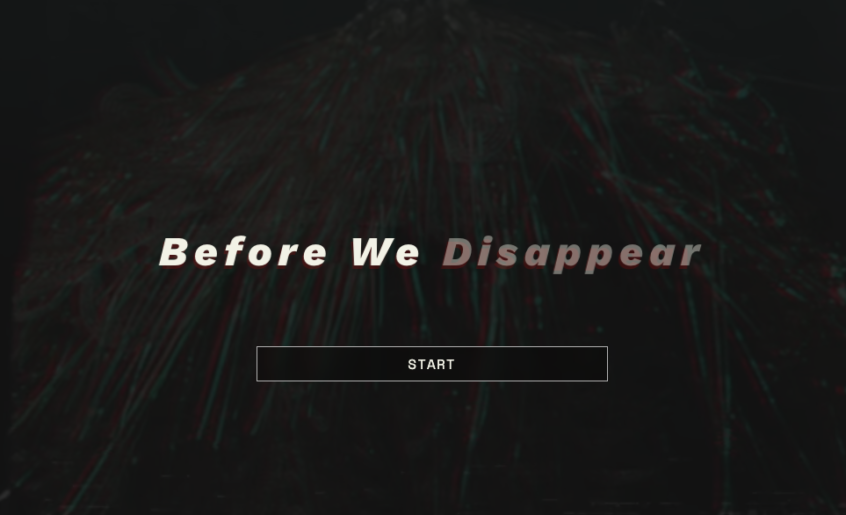 Upon clicking “Enter,” Before We Disappear opens to a low-angle shot of a house surrounded by dense vegetation, seemingly immune to the vivid jabber and birdsong on the sound track. The camera pans over the encroaching shrubbery and the carvings on the outer walls instead, barely registering the human figure in a cream-coloured headscarf behind a screen of leaves and branches. The figure’s features are blurred, visual noise. Cut to a close-up of an intricately decorated mask resting in the open. One can almost smell the chlorophyll in the air. Escalating melody accompanies the figure in the headscarf, now in full focus, into the entrance and up the stairs. Then, across a threshold, one sees the mosaic wall of a small room. This empty house is familiar territory.We are what remains reads part of the short introduction that greets visitors of the website Before we disappear. Let this be a space of rest writes Asmaa Jama, the Somali poet who wrote and directed the work in 2020 – a year that redefined our social experience- in collaboration with Gouled Ahmed, Gebriel Balcha, Joseph Horton, Ibrahim Hirsi and Roseanna Dias. The interactive online experience tries to capture the dynamics of (in)visibility through the metaphor of the ghost, who inhabits a space that is not a home. It does so by engaging in dialogue with the audience, who are asked about their experiences with visibility and disappearance. Each yes or no answer leads to alternative chapters on hypervisibility, the state of being unwitnessed, wholeness, and alienation. The masked figure features in all of them, donning the sartorial adornments that capture a splitting self-perception caught between insignificance and conspicuousness.

In another scene, the protagonist sits by a small table set for tea on the lawn outside a country house dressed in a black suit and black shoes. The masked figure has “arrived” but the door and windows are shut. A voice over urges the figure to leave because it has taken up too much space, relegating other people to shadows. Unlike the transient figure, the house is permanently rooted. When the accusation ends, connection is severed and the screen fills with static. The host has expelled its parasite, an allusion to a crooked idea of hospitality that privileges accommodation over recognition, the latter of which is only fully granted on departure: We are Black, migrant, working class, transnational.

Before we disappear is a product of these strange times of hypertrophic image-making and exchange, where mental health is often sought via the spectacle of distanced socialisation – zoom calls with isolated family, online yoga classes – while wellbeing is aestheticized in the self-affirming qualities of selfies. The work is also made in the fragmented, visually-arresting, model of image-mediated digital storytelling. It could be a music video, a fashion film, an advertisement, or an afrofuturist movie – a product for mass consumption, but it evades such pigeonholing. The styling by Addis Ababa-based Somali artist Gouled Ahmed is bold, sumptuous, and unique, complementing the lush and maximalist design of the setting and the atmospheric soundtrack featuring artists such as Aweys Khamiis Cabdalla.